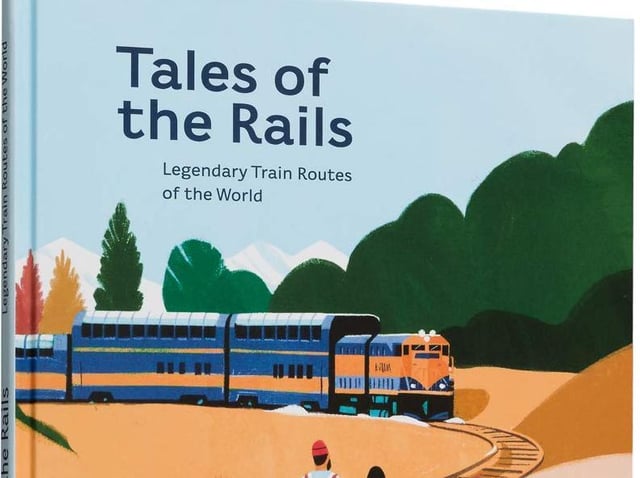 Stories of the rails

Tales of the Rails: Legendary train routes in the world

There will be a large number of takers for this exhilarating visual journey through the rich history of rail transport as the top team, writer Nathaniel Adams and illustrator Ryan Johnson, take teens (and adults!) On a fantastic, exhilarating ride.

Share the addicting sense of adventure as you are transported around the world and embark on thirteen stunning rail routes in the company of drivers, conductors, passengers, and a cast of diverse characters on board waiting to guide you through the book.

Learn about Japan’s record breaking bullet train, then slow down a little on the Caledonian Sleeper for a night ride in one of the UK’s last sleeping cars. See if you can see the bears out of the window during a trip through Canada’s wilderness.

Marvel at the notoriously steep, rack and pinion Snowdon Mountain Railway, see the Northern Lights in the Arctic Circle, and traverse Asia on the world’s breathtakingly long (5,772 miles!) Trans-Siberian Railway.

This beautifully illustrated, entertaining, and fact-packed book explores where and why these routes exist and discovers facts about the people who keep the engines going. It’s a nostalgic and heartfelt celebration of the golden age of rail travel.

And with its stitch-bound cover, charming, easy-to-read format, and adventurous approach to learning, this is the perfect gift for train fans of all ages.

Tik Robin and the Christmas Leprechaun

Let your imagination run wild with an enchanting story inspired by the beauty of nature, wildlife … and birds of all sizes, shapes and colors.

Tik Robin and the Krismas Goblin – a wonderful world-building novel about a little robin’s valiant struggle to save his best friend – was a ten-year love affair for Tony Sergeant, a Lancashire writer and former elementary school teacher on remission after a two-year battle against the CNS -Lymphoma, a type of blood cancer.

With the help of his supportive wife Erica, who also illustrated the book cover, Tony completed and published the story, which he now enjoys reading with his eldest son Edward, who both loves the book and shares wild adventures.

The star of the story is the adorable Tik Robin, who looks forward to Krismas in the town of Chestnuttington, one of the six settlements surrounded by the lawless lands, wild places where the law of nature is the only covenant one can live by.

But these changing times are fraught with conflict as savage creatures come to terms with a choice between a wild, free, but insecure existence, or a tame, drawn out, yet generally safer life in one of the settlements.

And from myth and legend, an ancient enemy has risen who threatens all life in the Six Settlements and in lawless lands alike. Kyfe Rabbit knows every tree and bush in the Whisper Forest. It’s a place he’s never been scared … until now.

Something is moving there, and although he has a deep distrust of other creatures, he knows he needs to sound the alarm and get the message across. As creatures far and wide prepare to fight for survival, the reluctant Tik Robin faces a desperate challenge of his own as he tries to save his abandoned friend Mickey Wren from a life of brutal slavery.

Across the mountains and moors, Tik’s search becomes bigger than a rescue offer when he discovers a shocking secret that could turn the tide in the coming war … one way or another, it becomes a memorable crisis.

Packed with drama, danger, an adorable cast of animal and bird characters, and an excellently presented “different” world of wildlife, this is a well-planned story of friendship, resilience, and courage that manages to inspire both children and adults to love and deal with nature and keep fighting to save our own planet.

And with three more books planned in the Tik Robin series, this is a story that will go well beyond the sunset at Whispering Woods.

When your Christmas plans hit rock bottom, take a seat and enjoy a performance of A Midsummer Night’s Dream like you’ve never seen before!

Award-winning children’s author Ross Montgomery brings joy and charm to the holiday season with this hilarious take on Shakespeare’s classic comedy in a brilliant, illustrated caper that will make teenagers giggle to the last curtain.

Nick is really in love with Jessie Stone and she doesn’t even know his name. In a ploy to win her heart, he plans to star in the school production of A Midsummer Night’s Dream, but if he’s cast as a silly butt instead of the romantic lead, his whole world collapses.

Step into Robyn, the school’s mischief maker who has some cunning tricks up her sleeve. With her help, Nick is sure he can get Jessie to notice him as long as his big plans don’t go up in smoke …

The course of true love certainly doesn’t go smoothly in Montgomery’s entertaining parody of the bard’s famous piece by piece, with friendship, true love, and an utterly disastrous Shakespeare production at the center.

With Mark Beech’s gallery of bold and anarchic black and white illustrations that bring the cast and action to life, published in the dyslexic Barrington Stoke format, this is wonderful entertainment for regular and reluctant readers.

Learning to be “normal” is proving to be a more difficult task than one would have imagined in a real royal frenzy of author and illustrator Tom McLaughlin.

So go to the palace and discover what happens to the royals when the queen’s lost brother gambled away the family fortune, leaving both the closets and bank balances decidedly empty.

The unfortunate Bertie just gambled away the family’s jewels, palaces, crowns and titles in a series of disastrous card games. It’s the last in a long line of disasters, and this time no one is going to save the Montgomery family. But this is no ordinary family … this is the royal family, and Bertie is the queen’s brother. So we say goodbye to the palace and say hello to a little house on King Street for these royals. Who would have thought it could be so hard to find work, learn how to live like normal people and fit in with your neighbors? It’s time to sink or swim!

With its clever political and satirical twist, a range of characters you won’t soon forget, lots of hilarious glitches, and McLaughlin’s comical illustrations, Queen of King Street is guaranteed to please both citizens and royalty!

The Adventures of Harley and Lucy: The Marshland Rescue

Join a nervous ex-military dog ​​preparing for retirement and life with a brand new family.

Maria Atlan, herself a former military officer and author of poems, short stories and everything to do with nature conservation, offers young readers an adorable and thoughtful adventure story with animals and nature conservation at heart.

Harley, a retired military service dog, is excited to start a new life with the Lacey family, but when he arrives he discovers that he has a new sibling … a tiny, bushy, tri-colored cat named Lucy.

And worse than a cat for a sister, the news is that local developers are planning to demolish the marshland of Old Ashley Place, home to myriad animals, in order to begin construction.

Can Harley and Lucy balance their timing differences to partake in an amazing animal escape to save the marshland from destruction … and can cats and dogs ever become true friends?

With illustrations by Adriana Santos and an exciting story against the race, this is ideal read for animal and adventure lovers.

You will get secret lodge offers if you happen to…

I quarantined in Beijing, Tokyo and Hong Kong.…

Prime 6 Causes to Go to Malta